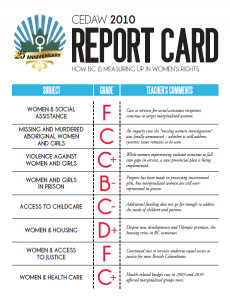 It’s report card time for thousands of students across BC. And speaking of report cards, West Coast LEAF has added the 2010 CEDAW Report Card to the Reform & Research section of Clicklaw. This report was produced by West Coast LEAF with input from various community agencies in BC. It looks at the government’s performance against the international standards of women’s rights and freedoms outlined in the United Nations’ Convention on the Elimination of All Forms of Discrimination Against Women.