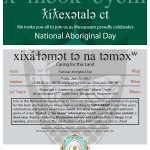 On June 21st provinces and territories across Canada will begin celebrations marking National Aboriginal Day.  From coast to coast we will be able to catch a glimpse of festive performances, tune in to traditional story telling sessions and learn more about the vast contributions made by Canada’s First Nation’s, Inuit and Métis peoples.

Did you know that almost every area of law, from consumer to family law, is affected by Aboriginal legal issues?  One of Clicklaw’s Common Questions – Where can I find an overview of how the law is different for Aboriginal people? – offers links to resources with information on key differences in the law of Aboriginal people.

Interested in taking part in this year’s National Aboriginal Day celebrations?  On June 21st the Musqeam Indian Band is hosting  xixá??m?t t? na t?m?x? (“Caring for This Land”), an event featuring a barbecue, live entertainment and number of games and performances for audiences of all ages.  Happy National Aboriginal Day!