The BC Law Institute (BCLI) is British Columbia’s only independent, non-partisan law reform body. It includes the Canadian Centre for Elder Law.

Over the past 20 years BCLI has produced over 60 reports, study papers and resources. Our reports include detailed analyses of the evolution of a particular law, consider the policy issues and recommend reforms to improve the law and/or make it more relevant in today’s society. Our study papers examine legal issues and often identify areas of the law that might be the subject of a future project.

In 2017 we have a number of ambitious and interesting projects on the go – we continue our projects to address issues in BC’s strata property law, reform the Employment Standards Act and reform the Builders Lien Act. We are also working on a study paper on the options available for financing litigation when individuals must go to court to protect their rights. Finally, we are in the final stages of a project of the Uniform Law Conference of Canada which will propose a Uniform Vital Statistics Act that could be adopted in all provinces and territories to modernize and help ensure better consistency across the country in how vital events are recorded.

We could not do the work we do without the support of hundreds of committee volunteers (over 370) and dozens of funders.  In January 2017, the BC Law Institute turned 20. We kicked off a year of celebration with an event in Victoria to both celebrate our achievements, but to also thank the many funders, supporters and committee volunteers who make it possible for our small team to do the work it does.

Guests were the first to see our 20th Anniversary video “Tending to our Laws” which is now available on our website on this web page. Thank you to our core funders – the Law Foundation of BC and the BC Ministry of Justice, all of our project funders, and to the sponsors of our 20th anniversary events – Gold Sponsor: Lawson Lundell; Silver Sponsors: BC Ministry of Justice, Spraggs & Co, Solvere; and Bronze Sponsor: Ramsay Lampman and Rhodes. Your support makes our work possible.

Q&A with the ED

Kathleen Cunningham is the Executive Director of the BC Law Institute. BCLI is one of our top contributors to the Reform & Research section of Clicklaw, which serves as a public window to legal reform and innovations in BC. Here is a short Q&A we did to help you better understand what BCLI does:

I imagine some of our readership might be unfamiliar with BCLI. Could you tell me more about what you do? The laws that govern our lives are established in legislation and through the courts over time. The BCLI identifies laws that are outdated or need to be improved in order to better serve British Columbians.

The resources we produce assist lawyers and other professionals. They range from questions and answers on pension division on the breakdown of a relationship to understanding and addressing undue influence on a client who is making a will or a power of attorney. Many resources are designed to help health care professionals, seniors serving groups, and seniors themselves to understand elder abuse and how to prevent it, and respond when it occurs.

How is BCLI a unique organization? We’re BC’s only independent, non-partisan law reform body. We look to find the laws that are not working for people, and when we identify an area of the law that needs reform, we make sure government and other stakeholders are also interested in seeing work to identify how to improve this area of the law.

How do you identify these areas of need, the laws that “aren’t working”? We invite people to send ideas to us through email, and lawyers that know about us will bring ideas to us; we’ve had a number of projects brought to us this way – our Strata Property law reform project was brought to us by the Notaries of BC, we have an Employment Standards Act project that was brought to us by a lawyer who works in that area, so it can vary. We also monitor what’s being said: what are the courts talking about? What are the commentators discussing when court decisions come out?

What happens once you settle on a new project? Who do you work with? We find the experts, and lawyers who work with this area of the law and who understand the issues that need change. We bring these people together in a committee and try to make sure that all perspectives and viewpoints are reflected. Our staff does in-depth research. They look at how the law came to be, how it has evolved, what the issues are, and ideas that might be considered from other provinces and countries.  The group debates the best way forward for BC. We produce a report that has proposed recommendations for changes in the law. That report then goes through a consultation process.

The committee reviews the feedback received during consultation. Sometimes they modify or change a proposal. We then publish a final report with recommendations. Government often reviews our reports and looks at the reforms that they’re able to pursue and implement—sometimes quickly, sometimes it takes a number of years. Sometimes they accept most recommendations. Other times, for policy reasons, they choose different solutions.

What kind of action is taken with these final reports? At the end of the day, the proposal and the research are in the public domain. We do not advocate for the implementation of the reports. We produce the reports, and other groups, stakeholders, people with an interest in that area – if they think reforms need to be adopted – they will take the recommendations forward in their advocacy activities. For example, Canadian Bar Association BC Branch (CBABC) has looked at different reports over the years. Our reports are used to help demonstrate issues, the need, and offer solutions. Four of our reports are mentioned their “Agenda for Justice” released on January 30th, 2017. 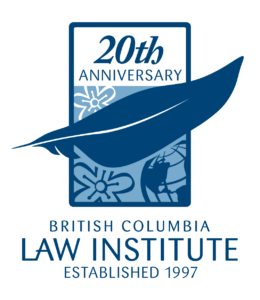 How aware do you think the public is about your work? Do you see more awareness-raising in your future? The biggest challenge that we face is that people don’t know who we are. Our challenge is making sure the public and other stakeholders, maybe less the legal profession, and more so other organizations – that they know we exist and what we do and don’t do. I’m excited that we’re broadening our reach and more ministries and other organizations are learning about us.  We will continue to look at how to raise more awareness. Our 20th anniversary celebrations will be one platform for doing this in 2017.

Tell me more about yourself and how you first got involved with BCLI. I’ve been the executive director since June 2015. However, I got involved in the late 1990s.  I worked for a trust company – acting as executor and trustee of people’s wills; we discovered some of the legislation we had to use was no longer appropriate. The BCLI had a project on the Trustee Act.  After 7 years and a number of shorter reports, the BCLI produced a report to modernize the Trustee Act and I was invited to sit on the project committee. After that project, I joined the BCLI board – I was appointed by the Law Society of BC (LSBC), to be one of the LSBC’s appointees. A few years later, I worked with the Public Guardian and Trustee, to help implement new legislation around the Power of Attorney Act and guardianship laws that were changing. I also did a lot of work around elder abuse, which meant I was always dealing with law and law reform.