This month, we feature the BC Provincial Court, a Clicklaw contributor.

The BC Provincial Court’s  2015/16 Annual Report highlights several of their innovations: the use of video technology to save transports for prisoners’ preliminary court appearances, an active website and social media presence for more open communication, improvement in caseload management, an open and accountable complaint process, and volunteer activities by the Court’s Judges, Judicial Justices and staff.

Their efforts to serve the public by providing an accessible, fair, efficient and innovative forum for justice also include several notable initiatives with direct public impact: In addition to hosting the second-ever Twitter Town Hall, the Court is also taking greater efforts to improve meaningful access to justice for self-represented litigants (SRLs), and has recently released Guidelines for Using a Support Person in Provincial Court.

The Guidelines clarify that the Court welcomes self-represented litigants (SRLs) to bring support persons to civil and family court trials or hearings, although individual judges still have the discretion to decide whether the support person’s presence would be disruptive or unfair in a particular case.

The help provided by the support person can include: taking notes, organizing documents, making quiet suggestions to the SRL, providing emotional support, and doing any other task approved of by the judge.

The Court hopes that this initiative will bring clarity, consistency and credibility.

Further details are provided in the Guidelines and the Court’s eNews announcement.

The event invited anyone to “tweet” a question to Chief Judge Crabtree, who would endeavor to answer all questions in a two-hour period on April 6th.

As the Chief Judge explained, “Last year’s Town Hall wasn’t just a one-off event intended to make a splash. It was part of the Court’s ongoing communication initiatives dedicated to two-way engagement with the public…It’s just as important that we listen to the questions and comments of British Columbians about their courts and justice system. Our public speaking engagements permit this two-way communication, but Twitter provides an opportunity to engage with more people in a different way and with people who may not be able to attend a class or meeting due to geographic or other barriers.”

The Court received 176 tweets and responded with 129 answers and 9 comments.

The success of #AskChiefJudge inspired the Nova Scotia Courts to launch their own #AskaNSJudge event.

Information for the Public

The Court also continues to publish new information through its website. As a Clicklaw contributor, the Court ensures its resources are made more widely available and searchable on Clicklaw.

The Court’s Digital Communications Coordinator, retired judge Ann Rounthwaite, said “We try to provide people with useful and interesting information about the Court and its work by regularly publishing short eNews articles on the website, engaging in two-way communication through @BCProvCourt on Twitter, and providing helpful information on our website.”

For example, see these resources on Small Claims:

Stay Informed with BC Provincial Court

Do you have questions for Chief Judge Crabtree?

About his career and experience as a Provincial Court Judge and as the Chief Judge of the Court? About his leadership and the Court’s many initiatives? About judicial appointments, judicial education, reducing delays, or …?

You’ll have an opportunity to ask him yourself, in two weeks’ time. Clicklaw will also be at the event in support, to answer any questions about public legal education and information (PLEI) in BC, contributor organizations, and more!

Tweet your questions using #AskChiefJudge on or before April 6, 2017. 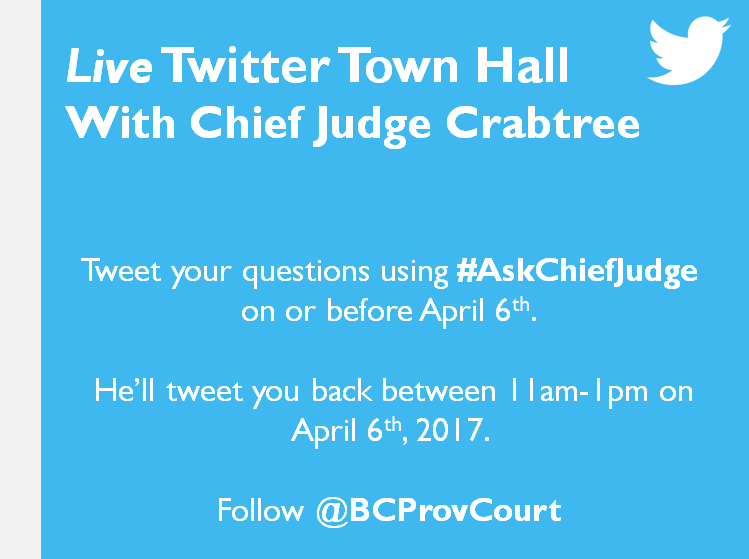 Please note that the Chief Judge can’t discuss individual cases or political issues, and may not be able to answer all questions during the Town Hall, but efforts will be made to answer outstanding questions on the Court’s website after the event.

Answers will also be available at #AskChiefJudge.

Here’s a Throwback Thursday to last year’s first ever Twitter Town Hall: See the post that gave a recap of all the events.

Stay informed with the Provincial Court: