Further to our earlier post on the upcoming Election, here is some more information provided via the BC Civil Liberties Association (a Clicklaw contributor organization) on their blog that we wanted to share:

It’s important that we all know our rights when it comes to voting, and what we can do if something goes wrong.

The so-called Fair Elections Act passed by the Conservatives last year changed many of the rules about what you need in order to vote. Here are a few things to remember:

Some voters were told that they did – this is INCORRECT. If you present two pieces of ID, one of which contains your address, you are good to go. Neither one needs to include your picture. If you’re told you need photo ID on Election Day, ask to speak to the poll supervisor to clear up the confusion.

2 – If you have a Driver’s License or other government-issued I.D. with your: (i) name, (ii) address, and (iii) photo, that’s all you need to vote.

You do not need a second piece of ID if you have your driver’s license.

3 – There are all sorts of documents you can use as identification on Election Day.

These include: a library card, student ID card, a bill or bank statement, a label on a prescription container, a government cheque or cheque stub, and many other options. And it doesn’t even have to be the paper copy; an e-statement or invoice works too. For the full list of acceptable documentation, click here. Just make sure at least one piece has your address on it.

4 – If you don’t have anything with your current address on it, don’t despair!

Although the so-called Fair Elections Act eliminated vouching for identification purposes, it maintained (after much criticism and advocacy) a version of vouching for address. It’s called an Attestation of Residence. If you don’t have anything with your current address on it, someone can “vouch” for where you live as long as they:

While this is not an easy list to meet, a room mate, family member, or neighbour may be able to help – don’t be afraid to ask!

Additionally, Elections Canada has produced a Letter of Confirmation of Residence which can be used by voters who are 1) members of a First Nation band but don’t have a street address on their ID, such as those who live on reserve or 2) those who receive services from a shelter or soup kitchen, or live in a student residence or long-term care facility. Here’s the link to the letter:http://www.elections.ca/id/EC50053_e.pdf – get it signed by the administrator of the facility where you live and bring it, plus a second piece of ID with your name on it to the polls, and you’re set!

5 – Your Voter Identification Card (VIC) has no legal status, but you might want to bring it anyway.

This summer, the BCCLA intervened in a case brought by the Council of Canadians and Canadian Federation of Students challenging the Fair Elections Act. They were hoping to get an injunction to allow people to rely on their VIC as one of their pieces of ID, but were unsuccessful. So your VIC won’t count as ID on Election Day, but it may make it a bit faster and easier for people to identify which line-up to join. So bring it if you’ve got it.

6 – Your Sex, Gender Expression and the Sex Indicator on your I.D. and Voter Registration Documents do not affect your right to vote.

Check out this great resource from EGALE for more information for trans voters.

Dirty ballots – meaning they already had marks on them when they were given to the voter – were observed in a number of ridings over the weekend. Check your ballot, and if there’s any kind of weirdness to it, return it and ask for a new one.

8 – You do not have to pre-register to vote.

While you will save yourself time if you’re already registered, you CAN register to vote at the polling station on Election Day. Just bring the identification you’ll need (described above) and ask to register. No big deal.

The right to vote is protected by the Canadian Charter of Rights and Freedoms. Knowing our rights is the best first step towards defending them. 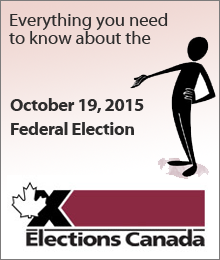 Are you registered to vote?

Check here. If you’re not registered, you can also sign up and/or update your address at that link by next Tuesday, October 13 at 6pm (local time).

Read about other ways you can register here – by mail, or in person.

Busy on the 19th? Vote in advance.

Advance Voting: Friday, October 9 to Monday, October 12, between noon to 8pm. Check your voter information card that was mailed to you for where to go to vote in advance. You can also find your advance polling address here.

Another option is to vote at any Elections Canada office or by mail. Read more about alternative voting options.

What time can I vote on October 19?

Is my employer required to give me time off to vote?

Yes, most of us are entitled to 3 consecutive hours to vote on the 19th if you don’t have 3 hours outside of work for voting. Your employer gets to decide when. Read more about time off and some exceptions.

Has my riding changed?

Canada is divided into 338 ridings. One representative, or member of Parliament (MP), is elected for each riding. See the list of candidates for your electoral district here.

Federal riding boundaries are adjusted every 10 years. Thirty new ridings were created in the latest readjustment in 2013, affecting this year’s election – there are six more seats for B.C.

Your riding/electoral district’s information will be included on your voter information card that you receive in the mail, or look it up here. Once you’ve searched, click on “Where do I vote?” to see your location-specific information (see the highlighted section below): 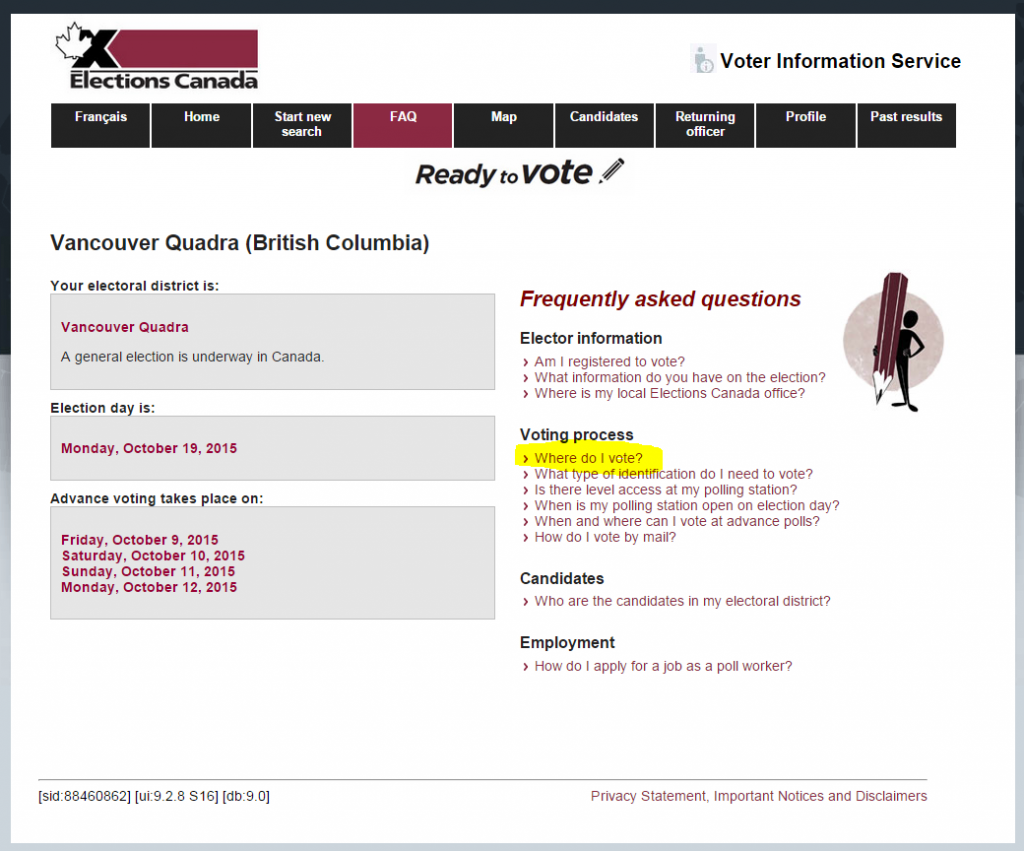