Clicklaw, Courthouse Libraries BC (CLBC) and LawMatters are very pleased to let the public and legal information community know that the Canadian Bar Association BC Branch’s long-serving Dial-A-Law scripts are now on Clicklaw Wikibooks. They join a growing library of content from other key producers of 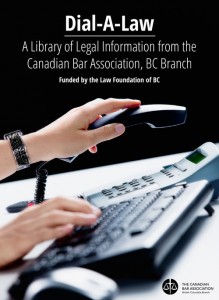 public legal information, including People’s Law School, TRAC, BC CEAS and others including some authors CLBC helped to publish, such as Cliff Thorstenson and John-Paul Boyd. The collection of scripts will be printed in a 500+ page book to be shipped to public libraries in BC, at no cost to the libraries, in conjunction with the LawMatters program.

CLBC and CBABC announced this news by formal press release yesterday (April 14, 2015). It’s exciting since Dial-A-Law scripts are perhaps the longest-surviving example of the BC legal profession’s dedication to helping the public with free legal information. The scripts cover over 130 legal topics, and have existed in various formats for over 30 years. Dial-A-Law started in 1983 with help from the BC Law Foundation and its scripts have been edited by volunteer lawyers ever since. More information about the various ways you can access Dial-A-Law is on Clicklaw’s page for the service.

Yesterday’s announcement is significant because now the scripts are even more accessible. Clicklaw Wikibooks are all about keeping legal information in a single spot so that editors and lawyers can update it—this is one of the benefits of a Wikipedia-style platform—but letting the end user choose whether to print, read online, or otherwise export the content in a way that meets their needs. Users can download whole contents, or only portions, of Clicklaw Wikibook in PDF or EPUB. They can order a printed book for cost, or read it online.

The open-source nature of the Mediawiki publishing platform means it is a tool that is affordable to implement, but also well-supported by a community of developers who are all about open access and the democratization of information. The announcement references how CLBC uses the same technology platform that powers Wikipedia, and a coincidental discussion that one of CLBC’s staff, Nate Russell, had with the founder of Wikipedia at a conference held by the national CBA in Vancouver in 2012. As some have noted, Clicklaw Wikibooks is not a site that anyone can change the content of. It’s limited to registered and pre-approved editors from the legal and PLEI community. This was something that Jimmy Wales had endorsed as a good starting point for a topic like the law, which requires a stricter standard of reliable information to remain credible and useful to members of the public and the legal community alike. The Clicklaw Wikibooks platform has been customized where required to really accommodate printed output too, and to be useful to public libraries.

CEO for CLBC, Johanne Blenkin, says in the joint release “many continue to rely on community libraries and printed materials, so keeping quality legal information in print is also important. Clicklaw Wikibooks is about helping content partners offer their up-to-date legal information in a range of digital and physical formats.”

If you want to help get the word out, feel free to share this blog or this release! More has also been posted over on CLBC’s blog, The Stream.